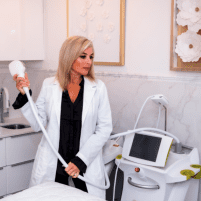 French Med Spa Uptown Naperville uses the PicoSure laser because it is the fastest and most effective ink removal laser. The PicoSure laser is proven to work twice as quickly as other tattoo removal lasers. It is also highly effective at removing all of the ink colors and designs, no matter how settled they are in the skin. The PicoSure laser emits concentrated energy at a highly accelerated rate, at one trillion times per second. That energy is sent into the ink, breaking it up into microscopic particles. These particles are then absorbed by the immune and lymphatic systems and then harmlessly removed. PicoSure has no long-term negative side effects, and is safe for most patients. The number of treatments required can vary widely, just as tattoo types and shapes vary widely. The factors that come into play include: the size of the tattoo, the amount of ink in the tattoo, how deep the ink is, and the location of the tattoo. Many patients start to see a dramatic lessening of ink within the first session or two. After a tattoo removal, you may feel a mild warmth, similar to a minor sunburn. Small blisters or scabs may temporarily appear, although this is unusual. Be sure to keep the tattoo covered and moisturized with an approved ointment during the healing process. Try to drink plenty of water after a tattoo removal, as it can flush out the microscopic ink particles more quickly.